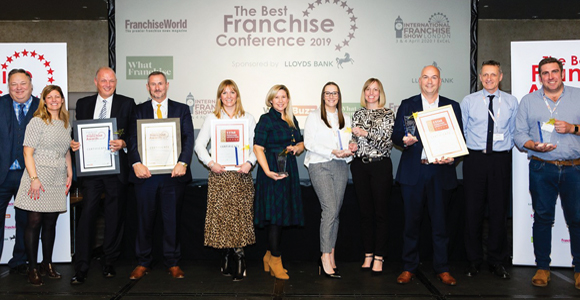 WorkBuzz, the specialist franchise research company, has announced the winners of The Best Franchise Awards 2019 sponsored by Lloyds Bank, which were presented at the annual Best Franchise Conference held at the Marriott Hotel, Leicester.

The Best Franchise Awards are based on feedback from franchisees that have completed WorkBuzz’s confidential Franchise Satisfaction Benchmark survey.

By completing the survey, each franchisee rates their franchisor on everything from training and support to shared goals and how the experience of being a franchisee compares with their expectations.

The Best Franchise Conference brought together over 130 of the UK’s top franchisors and service providers, who gathered to network and share best practice said WorkBuzz.

In addition to celebrating the UK’s best franchisors and franchise service providers, the awards also saw Richard Holden, head of franchising at Lloyds Banking Group, receive special recognition as the first individual to be named a WorkBuzz Hero.

The WorkBuzz Hero programme has been designed by the research company to recognise individuals who have had a lasting impact on their industry and have made a positive contribution to improving engagement. This new exclusive award will see WorkBuzz announced only one Hero per quarter.

WorkBuzz said Holden’s support had been critical for the launch of the company’s 5 Star Franchisee Satisfaction survey and that he had also championed and helped to raise the profile of the Best Franchise Programme.

Steven Frost, chief executive of WorkBuzz, commented: “Franchising is a fantastic industry, but with so many different franchisors all shouting about their support, it’s hard to identify the best franchise opportunities that truly deliver on their promises.

“What makes the winners of the 2019 Best Franchise Awards unique, is they are based on feedback from thousands of actual franchisees. We’d therefore like to congratulate the winners. They are the crème de la crème of UK franchising. If you’re a prospective franchisee, whilst nothing guarantees that you’ll be successful, these franchisors are a great place to start your search.”

Suki Dehal, franchise development manager of Lloyds Banking Group, said: “Lloyds Bank are delighted to support WorkBuzz with the Best Franchise Conference & Awards again this year. I have seen first-hand the hard work from franchisors in supporting their franchisees, with fine margins finally separating the winners.

“To see how the event has grown in stature over the years is testament to the work done by the team at WorkBuzz to provide in-depth feedback, which has been invaluable to the growth of franchise brands.

“To speak with business owners about their key achievements has given me a fantastic insight into the motivation behind these fantastic models, who truly value the feedback and collective success of their franchisees.”